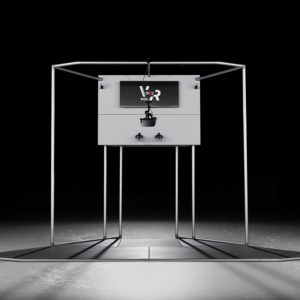 PARIS, France – March 14th – mk2, the leading virtual reality experience provider in Europe, debuts the first VR plug-and-play solution for professionals: the mk2 VR Pod. The announcement comes one year after the opening of mk2 VR, the first and biggest VR space in Europe. With this large VR offering, mk2 will become the first VR distribution network worldwide with this end-to-end premium and white-labelled product line. mk2’s continued growth in the VR space signals the evolution of the European cinematic leader which has produced over 100 films, operates over 26 movie theaters spanning 200 screens and offers a library of more than 800 films from the world’s greatest directors, from Charles Chaplin to Xavier Dolan.

The mk2 VR Pod is the most adapted solution for cinemas, location-based entertainment, museums, institutions and more. mk2 VR offers twelve virtual reality pod offerings featuring three technologies (HTC Vive, Oculus Rift and PlayStation VR) and two full-body immersive simulators: the Holodia rowing machine and Birdly®. By including all the necessary technology within an aluminum-ballasted structure, the VR Pod can be installed anywhere within a few hours. The flexibility and scalability of the mk2 VR network puts the company on track to provide virtual reality experiences to the masses.

“Providing state-of-the-art technology to fill the void of white label solutions in the virtual reality space will be a catalyst for making VR a requisite part of consumers’ entertainment expectations,” says Elisha Karmitz, General Manager at mk2. “Adapting VR is a natural next step for the cinematic community and mk2 aims to be their trusted partner in delivering quality and memorable experiences.”

mk2’s premium catalog of curated VR experiences will be immediately available to customers with the latest offerings from the world’s leading studios updated monthly. Their partners include the following studios: Felix & Paul Studios, Atlas V, WITHIN, SuperHot Team and many more.

mk2 has sold its first production of VR Pods to premium partners around the world signaling the inception of the distribution network. These partners include public institutions (the National Public Library of France and the Film Fund in Luxembourg), leaders in the movie theater industry such as Nordisk in Scandinavia as well as exclusive partners in Brazil (Arvore) and Asia. Within the first half of 2018, over 70 pods will form the beginning of mk2’s future VR distribution network and more than 200 pods are expected by the end of the year. For more information, visit  www.mk2vr.com/en/ and www.mk2vrpod.com.

mk2 is a multi-award winning film exhibitor possessing a know-how extracted from 42 years of excellence. mk2 produced more than 100 movies and operate 26 theaters in Europe. mk2 have been awarded several times for the movie they produce or distributed, including 160 awards in major film festivals. From mk2 birth to nowadays, innovation and creation has always been part of their DNA. mk2 VR is a logical move for such an innovative and experimented company. In the coming month mk2 develop actual knowledge to the VR world by opening, venues, investing in content production and distribution, and a communication agency dedicated to VR.