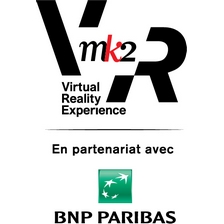 mk2, partners with BNP Paribas, to launch the first VR-dedicated facility in Paris (in English)

(Paris, France, November 17th) – After two years of research, development and exchanges with the biggest studios and market specialists, mk2 in partnership with BNP Paribas, unveils the opening of mk2 VR, the first place entirely dedicated to virtual reality, on December 9th in mk2 Bibliothèque in Paris. The only one of its kind, mk2 VR is a new kind of place of culture and entertainment, paced all year long with the programming of exclusivities and premieres.

A world’s first
Since its creation in 1974, mk2 has made a point to cultivate a model of cultural alternative. Thus, they have built bridges between cinema and other art and expression forms by creating living places, guiding the viewers before and after the screening.
“With mk2 VR, we become the first theater company in the world to open a dedicated place to virtual reality and we are proud to begin this pioneer project in France.” says Elisha Karmitz, general director of mk2 Holding. “BNP Paribas, major support of cinema, also very engaged with new technologies, established itself as the main partner for this project.”
For a 100 years, BNP Paribas and the cinema have been sharing a common rich and varied history. “Pioneer bank in term of virtual reality, BNP Paribas will be really happy to present mk2 VR to all its clients. This partnership will allow the bank to continue its engagement in favor of the emergence of new forms of writing made possible by the appearance of technologies like virtual reality” says Bertrand Cizeau, communication director of BNP Paribas group.

The best of virtual reality
Mk2 VR is a jewel of design and technology conceived specifically to make virtual reality a simple, accessible and collective experience. Mk2 VR is first and foremost a technical prowess made possible thanks to the support of its technological partners like HTC Vive, Sony Playstation, Oculus Rift and MSi. Featuring the latest virtual reality headsets and “full body immersive” simulators, a first in France, mk2 VR will focus its efforts on making the best possible user experience.
Faithful to its reputation, mk2 brings a special level of requirement to the programming, trying to be both eclectic and always new. Fictions, animations, documentaries, video games, simulations and immersive experiences, the contents are chosen for their quality, the emotions they produce and the fresh look they bring. “mk2 VR is a playfield of expressions made to honor the work of the studios and the independent content creators” explains Elisha Karmitz. “Throughout the year, exclusive contents or premieres will be presented to the viewers. We are looking forward unveiling our first collaborations, both with French studios and international creators.”

A prowess of design and innovation
Rich of a 40 year long history marked by  many artistic collaborations, mk2 has teamed with the promising and innovative design studio Bonsoir Paris (who works with clients such as Hermès, Nike Lab, COS…) known for its creative approach at the junction of art, functional design and science.

Next December 9th will see the launch of mk2 VR to the public and it will only be the beginning.
www.mk2vr.com

About mk2
Emblem of worldwide art-house cinema, mk2 is a family company founded in 1974 by Marin Karmitz and now ran by his sons Nathanaël and Elisha Karmitz. mk2 defends a quality cinematography and always comes up with living places and creative discoveries. mk2 includes 400 partners for 26 movie theaters in Europe. Always at the forefront of innovation, mk2 opens December 9th 2016 within mk2 Bibliothèque its first dedicated VR room. www.mk2pro.com

About BNP Paribas
BNP Paribas is a leading bank in the Eurozone and a prominent international banking institution. It is represented in 75 countries, with more than 189 000 partners, with more than 146 000 in Europe. The Group has key holds in three main activity branches: Domestic Markets and International Financial Services, which has its network of retail banks and financial services regrouped in Retail Banking & Services, and Corporate & Institutional Banking, centered on Firm and Institutional customer base. The Group supports every customer (individuals, associations, entrepreneurs, SME, large companies and institutions) to help them realize their projects by offering services of funding, investment, saving and protection. BNP Paribas also develops its integrated model of retail banking in all the countries of the Mediterranean basin, in Turkey, in Eastern Europe, and has an important network in the West of the United States. In its Corporate & Institutional Banking et International Financial Services activities, BNP Paribas also benefit from a leadership in Europe, a strong presence in America, as well as a solid presence and a strong growth in Asia-Pacific. www.group.bnpparibas/