SUPPORTING CINEMA THAT CHANGES THE WORLD

mk2 promotes art-house cinema that takes a unique critical view of the world whilst reinventing the filmmaking process. In its theatres, mk2 strives to bring the best of world cinema to the widest possible audience, creating events, lectures and masterclasses in the aim of giving cinemagoers the tools to understand it.

mk2’s editorial policy seeks to move and challenge the audience: making people laugh, cry, dream and think whilst exploring the individual and collective forces that shape the world and so filmmakers’ role in society. These aims are a key point in  making the choice to produce directors such as Abbas Kiarostami and Krzysztof Kieslowski or, more recently, coproduce Jia Zhang-Ke‘s Mountains May Depart, Xavier Dolan‘s It’s Only the End of the World and Pawel Pawlikowsi‘s Cold War .

In everything that it has done since 1974, mk2 has sought to highlight the diversity of world cinema. It was one of the first companies to produce Iranian (Mohsen Makhmalbaf) or Korean (Hong Sang-Soo) directors in France and to engage itself in the promotion of Asian cinema, for example. The films championed by mk2 share the same intelligence and spirit, as shown by the somewhat mystical approach taken by Kieslowski’s Three Colours trilogy or more recently the dialogue between man and nature in Naomi Kawase’s Still the Water and An.

To establish a cinema in the community, you first need an urban and architectural vision. mk2 cinemas are forums for stimulation, creative discovery and entertainment. Working with local actors (schools, charities, restaurants, etc.) and moving into deprived areas make our cinemas becoming an essential part of city life.

mk2 also aims to revitalize deprived areas and creativity in the arrondissements overshadowed by Paris’s more coveted areas. As mk2 Quai-de-Seine and mk2 Bibliothèque have proven, the cinemas stimulate activity and renovation in areas under construction, contributing to redevelopment of the urban space.
Adapting the sites’ layout to encourage interaction and using its unique expertise to reinvent the before and after-screening, mk2 becomes a focal point in the community and increases its awareness of art.

Since the bookstore that opened alongside the first mk2 cinema in 1974, mk2 has seen its sites as forums for stimulation and encouraged cinemagoers to make maximum use of the space: bars, cafés, restaurants, food stalls, arts and crafts, and stores selling a selection of cultural and fashionable products, books and DVDs.

Spurred on by mk2 agency, it has created its own pop-culture festival, combining film, food and music. In 2013 and 2015, mk2 twice reinvented the before, during and after-screening under the glass roof of Paris’s Grand Palais, making the audience central to the experience. In putting the fun and festivity back into cinema, Cinema Paradiso is consistent with mk2’s emphasis on stimulation, which it has been developing since 1974.

mk2’s move into southern Spain in 2014, where cinema had been badly affected by the recession, is part of the same process and focus on the added value that art and cinema bring to the city life. Similar to the work undertaken when mk2 Bastille opened in 1974, mk2 gradually adapted its model at regional level and, with thought-provoking programming, attracted audiences back into the cinema.

ENCOURAGING DIALOGUE BETWEEN THE CINEMA AND ALL CREATIVE FIELDS

In its theatres, mk2 works to create bridges between filmmaking and other art forms by programming artistic and cultural events that have never been held in cinemas before and incorporating artworks into its sites.

mk2 cinemas are positioned as forums for stimulation that bring together a wide range of art and creation: exhibitions, debates, concerts, talks, courses, philosophical discussions and activities for young people are all part of a cultural programme shaped by cinematographic and literary developments. Thought with artists and designers to encourage creation, in perpetual motion, mk2 cinemas breaks down the walls between the arts and are characterized by challenging events and programmes that seek to encourage debate and creative discovery.

mk2 has created the concept of “cine-philo”, hosting conferences that use clips from all film genres to explain philosophical concepts. It stages numerous photography exhibitions inside its theaters and outside as well, on its walls. In February 2015, you could discover Jérémie Nassif’s extraordinary Voltige exhibition on the exterior of mk2 Bibliothèque. Few years earlier, it was a giant exhibition by the photographer JR around France’s National Library. A shot of the event is now on display at mk2 Odéon – Saint-Germain. 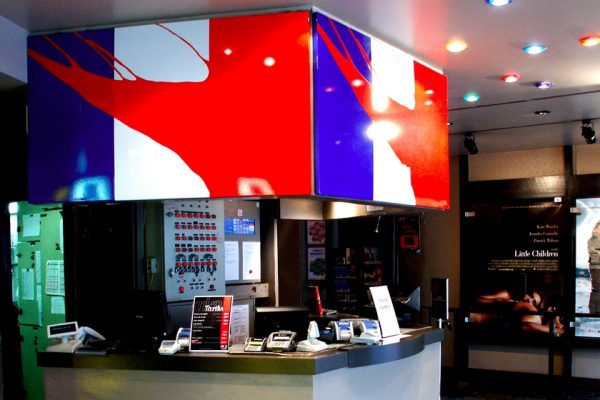 Installation of Rouge, Gérard Fromanger’s historic work in the foyer of mk2 Bastille 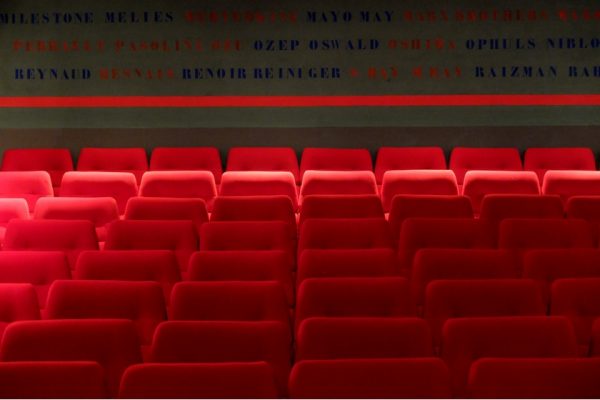 Takeover of Studio Parnasse and replication of the wall painting

Takeover of Studio Parnasse, whose main screen included a wall painting featuring the names of directors that the cinema’s owner had worked with. During renovations to expand from two to three screens, Marin Karmitz replicated the wall painting and added the names of the directors that he had worked with and three quotes: “que l’étranger serve le national”, “que l’ancien serve le nouveau” and “que cent fleurs s’épanouissent”
Copyright image : mk2 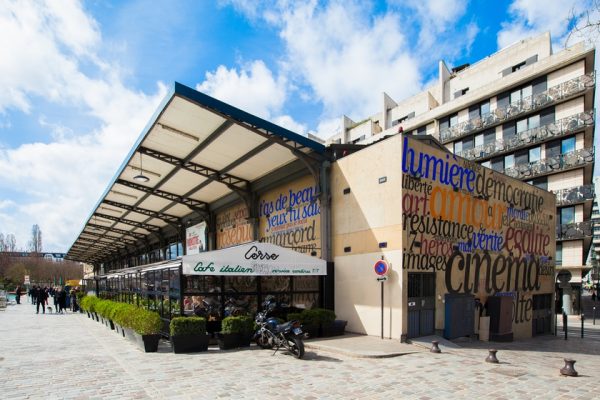 Development of mk2 Quai-de-Seine, including dozens of words connected with the history of mk2 and its cinema

Development of mk2 Quai-de-Seine by Frédéric Namur. Before the exterior was tagged, mk2 decided to tag it itself, with words connected with the history of cinema. Marin Karmitz asked Claude Maggiori to choose film quotes, including “tous les oiseaux sont des cons”, and Marin Karmitz added dozens of words connected with the history of mk2 and its cinema: 8 ½, comedy, light, May, equality, resistance, silence, truth, love…
copyright image : mk2 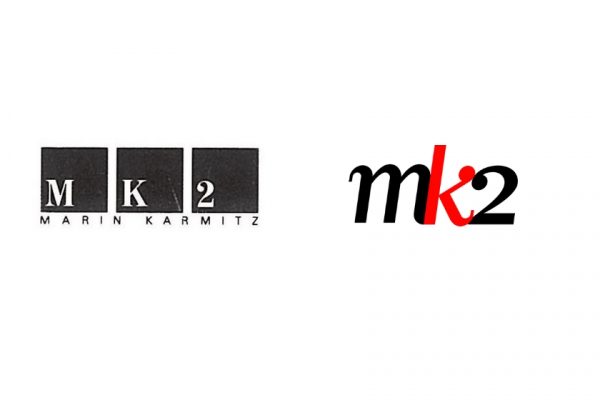 Creation of the mk2 logo by Claude Maggiori

Claude Maggiori, who designed the logo of the Libération newspaper, created the mk2 logo. 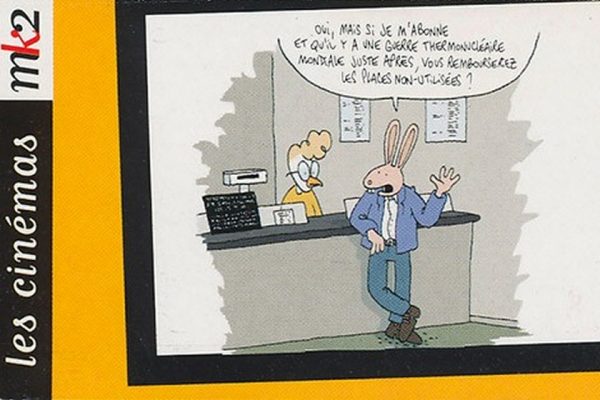 Creation of the mk2 projectcafé, which screened digital art videos 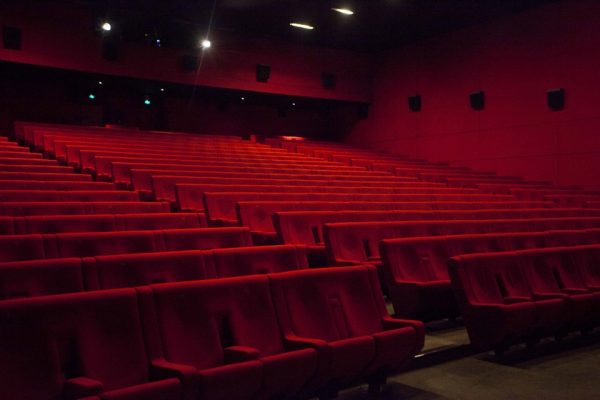 It had been developed with artists and designers from the galleries on Rue Louise Weiss, a hotspot for contemporary art in the early 2000s: 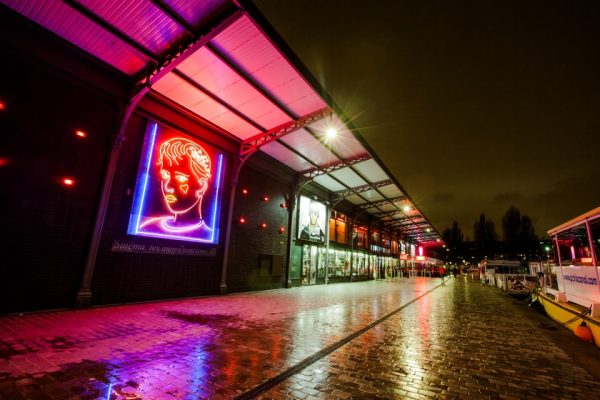 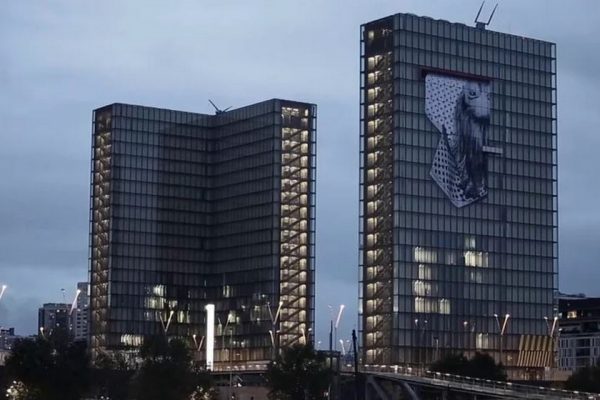 Unique collaboration with the artist JR on a giant exhibition on the square outside mk2 Bibliothèque.

A photograph of the event is now on display at mk2 Odéon – Saint-Germain.
See the video 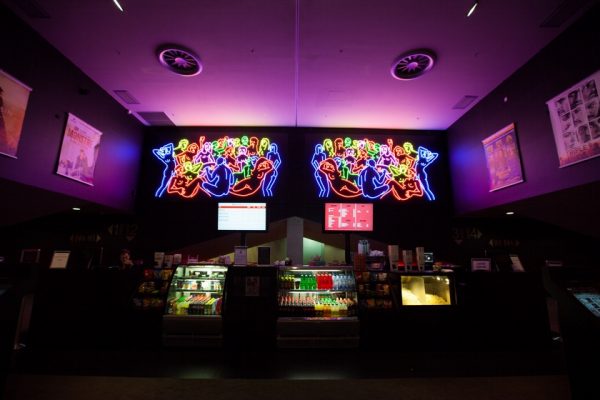 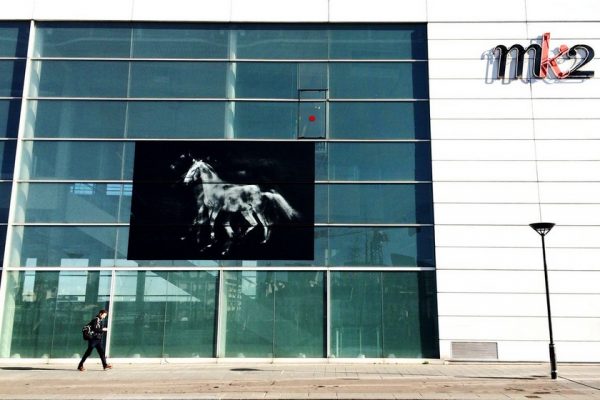 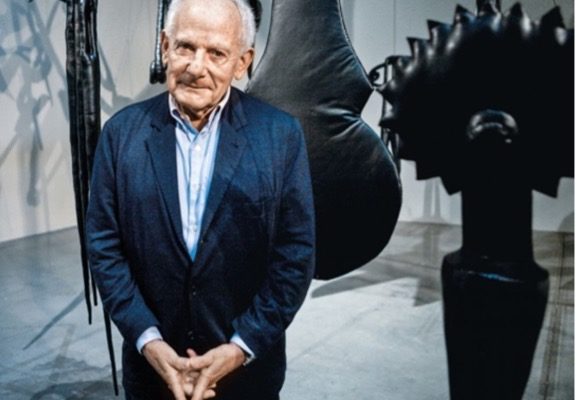 In October 2017, the maison rouge fondation Antoine de Galbert hosted the exhibition Étranger Résident by Marin Karmitz, founder of mk2. He unveiled an important part of his collection, nearly 400 works that question our way of being in the world. Having begun his career as a filmmaker, it is as a filmmaker that he has imagined the presentation of the hundreds of photographs, paintings, sculptures, drawings and videos exhibited on this occasion. 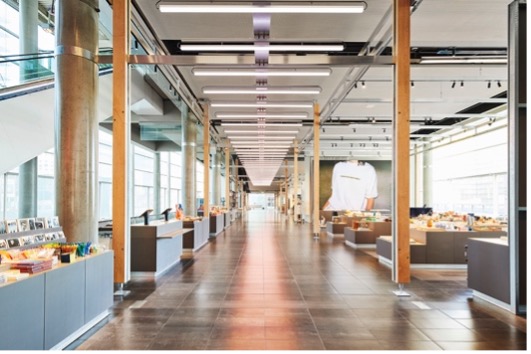 To transform the lobby of the mk2 Bibliothèque and rethink the spaces of its shop, mk2 called on the architecture agency Ciguë. In the mk2 Store, an impressive floor-to-ceiling structure made of aluminum and solid maple holds translucent hi-tech curtains. The mobile partitions add substance, play with the light, and round off the angles as much as they delimit the spaces of the concept store. 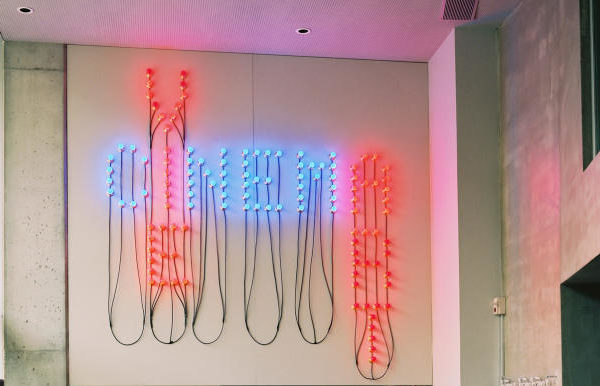 This luminous installation, specially created for the reopening of the mk2 Nation cinema, represents three words dear to the artist: “cinema”, “art” and “vie” (“Life”).

Collaboration with the artist JR, who created two monumental collages at the Hotel Paradiso

For the opening of the Hotel Paradiso, the first cinema-hotel, mk2 once again collaborates with the artist JR, who created two 15-metre high collages on the façades of the buildings in the inner courtyard. Only visible from the rooms with courtyard windows, the work pays tribute to two great classics of the history of cinema. 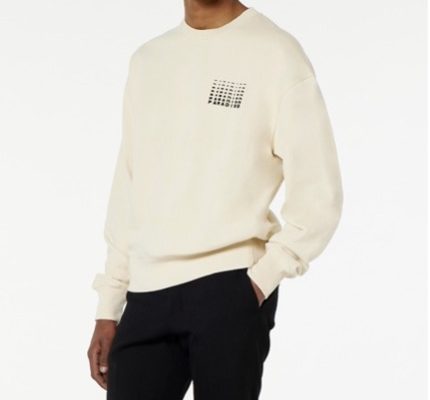 Alexandre Mattiussi creates a capsule collection for the Hotel Paradiso

Alexandre Mattiussi, the founder and artistic director of AMI, has created a capsule collection for the opening of the Hotel Paradiso. Cinema has always been part of AMI’s universe and has been a great source of inspiration for its creations. He has created a shared story between AMI and the codes and colours specific to the hotel through an elegant and casual wardrobe.