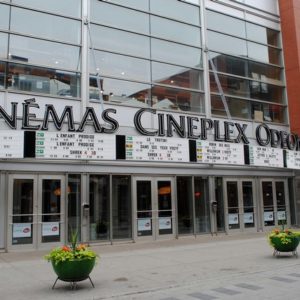 mk2 establishes itself at Quartier Latin movie theater in Montreal

Montreal, Monday, March 19, 2018 – mk2 announces the forthcoming opening of its first movie theater in Canada. Following an agreement with the company France-Film, which owns the property, mk2 will operate a 17-screen movie theater in the heart of Montreal’s Quartier Latin as of September 1st.

“We are delighted to have the incredible opportunity to present Montreal audiences with this ‘different idea of cinema’ we’ve been developing in Paris and across Europe. We are looking forward to working with all the remarkable talents we have met here, and to continue building upon the very special bond that mk2 cultivates with Quebec” remarks Nathanaël Karmitz, Chairman of the Board at mk2.

After 20 years in operation, the Quartier Latin movie theater, which was the largest cinema complex in Canada at the time of its launch in 1997, is thus treating itself to a makeover with the arrival of a renowned French company that imagines movie theatres as spaces for living, discovering and consuming. Blending easily into the surrounding urban environment, these spaces are developed by acclaimed designers and artists. mk2 has always been committed to working with local actors and rooting itself in working-class neighbourhoods in order to become a vital component of community life. The company has also demonstrated its unique knack for rethinking the before and after screening experiences.

“It is with tremendous enthusiasm, and after having considered many partners, that we chose the French firm mk2 to successfully carry out our relaunch project of the flagship Quartier Latin venue, in the heart of the Quartier des Spectacles. A highly prized name in Europe, mk2 best reflects our values, and it gives us great pleasure to usher in their first movie house in Montreal. Thanks to this partnership, the Emery Street screening rooms will undergo a comprehensive transformation in order to better fulfill their function as showcases of Quebec and French-language cinema, among other things, while also keeping in mind the public’s interest in other types of productions,” comments Jean-Claude Chabot, Director of Development at France-Film and owner of the Quartier Latin movie theater.

Thus, mk2’s Quartier Latin movie theater promises to offer the best of world cinema to all audiences, with an eclectic and varied line-up ranging from the most popular titles to quality auteur and independent films. The space will also be designed to host festive activities, events and immersive experiences. A different idea of cinema!

MK2 l Canada, a new company that operates movie theatres in Canada, is presided over by Charles Tremblay, to whom all of the company’s future partners may refer. Let us also note that mk2 has already been in operation in Canada for over a year, alongside Charles Tremblay, the founder of distribution company MK2 l MILE END, the exclusive distributor of the mk2 catalogue in Canada.

An emblem of international art-house cinema, mk2 is a family company founded in 1974 by Marin Karmitz, and which is now run by his sons Nathanaël and Elisha Karmitz. mk2 advocates for high-quality cinema and creates living spaces and environments that foster creative discoveries.