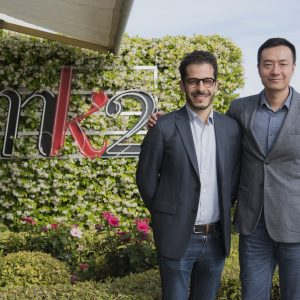 Cannes, France
During the 70th edition
of the Cannes Film Festival

Sky Limit Entertainment, the VR company co-founded by the acclaimed Chinese director Zhang Yimou (House of Flying Daggers, To Live, The Story of Qiu Ju…) and MK2, leading film and VR independent group in Europe (25 movie theaters (182 screens), a library of more than 600 films from Charles Chaplin to Xavier Dolan, 15 000 spectators hosted in its Paris-based VR venue since December 2016), sign an agreement on the licensing of their respective VR contents and hardware solutions.

As part of a larger strategy to expand its market share in global range, Sky Limit Entertainment will open its first VR venue in Paris on September 2017 under the Brand SoReal (created in 2016).
The SoReal venue will be located at the heart of one the biggest movie theaters in France: the MK2 Bibliothèque, operated by MK2, which hosts 2 million spectators a year in its 20 cinema rooms.
By joining hands with MK2, SoReal will present to its French partner and French audiences some of its copyrighted VR technology and contents. This collaboration will bring to the French customers a whole new VR experience that will enable them to totally immerse in virtual situations.

After the successful launch of the MK2 VR venue, MK2 is now providing its expertise for the international distribution of virtual reality content through its department mk2 films&VR.
MK2 films & VR presents a new catalogue of around a dozen singular works, from short films to documentaries and video games, including acclaimed French creations.
SoReal will be the first distributor to license the mk2 films&VR contents, in order to showcase them in their new VR-theme park in Wang Fu Jing, Beijing, which is the first VR theme park in the world.
SoReal will provide a series of exciting VR experiences, including space exploration, shooting games and adventure experiences, some of them will be programmed from September 2017 at the Paris-based MK2 VR venue.
SoReal and MK2 will continue to share their cultural legacies and technical prowess in order to bring VR technology both in China and France to the international spotlight and to expand their business in France and Europe.

About SoReal
SoReal is an Chinese brand in the entertainment field owned by Sky Limit Entertainment, a company co-established by famous Chinese director Zhang Yimou, It is positioned to offer immersive interactive entertainment experiences to customers around the global; its property include the world’s most advanced VR theater, largest multiplayer VR interactive system and a VR theme park situated in Wang Fu Jing, Beijing which is cover 3000 sqm. SoReal commits to transforming cultural landscapes by linking VR technology with entertainment.

A reference in world art-house cinema, MK2 is a family-owned company founded by Marin Karmitz in 1974 and run since 2005 by his sons Nathanaël and Elisha Karmitz. mk2 promotes quality filmmaking, operates its cinemas as modern agoras and supports creative discovery.
MK2 operates 25 sites (182 screens) in France and Spain, hosting 8.5 million spectators every year. MK2 also distributes a unique library of more than 600 films in France and around the world, including works by the biggest filmmakers in the history of cinema (Charles Chaplin, François Truffaut, Krzysztof Kieslowski, Abbas Kiarostami, David Lynch, Gus Van Sant, Xavier Dolan, and more). Every year, mk2 produces, coproduces, sells and distributes a dozen new films by established or promising directors, such as Naomi Kawase, Pawel Pawlikoswki and Jia Zhang-Ke. MK2 also develops its savoir-faire in the field of virtual reality, operating the biggest VR venue in Europe (MK2 VR, since December 2016) and promoting the worldwide distribution of VR contents (MK2 films & VR, since May 2017).
http://mk2pro.com/en/
http://mk2films.com/en/vr/
http://mk2vr.com/en/

Analytical cookies are used to understand how visitors interact with the website. These cookies help provide information on metrics the number of visitors, bounce rate, traffic source, etc.

Advertisement cookies are used to provide visitors with relevant ads and marketing campaigns. These cookies track visitors across websites and collect information to provide customized ads.