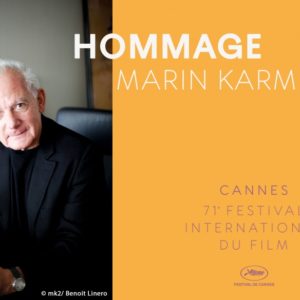 Hommage to Marin Karmitz in Cannes [in English]

On the occasion of the Dinner for Professionals of the world film industry organized by the Festival de Cannes on Friday, May 11th, a tribute will be paid to Marin Karmitz, founder of mk2, for all his work in favor of auteur cinema and while his film Blow for Blow (1972) will be screened as part of Cannes Classics the same day.

Author, director, producer, distributor and exhibitor, in his 50-year career in cinema, Marin Karmitz has produced more than a hundred films, has distributed nearly 400, has assembled a catalog of rights of more than 600 films, also creating and developing a cinema network of 12 movie theaters and 68 screens in Paris and now 10 movie theaters and 128 screens in Spain.